The Caves of Steel 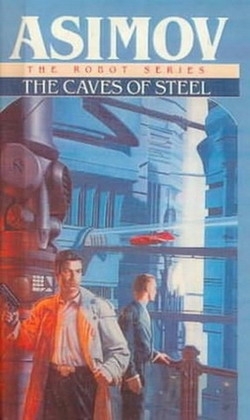 novel no. 05 in the Series: Asimov's Robots

The book's central crime is a murder, which takes place before the novel opens. (This is an Asimovian trademark, which he attributed to his own squeamishness and John Campbell's advice of beginning as late in the story as possible.) The victim is Roj Nemmenuh Sarton, a Spacer Ambassador who lives in Spacetown, the Spacer outpost just outside New York City. For some time, he has tried to convince the Earth government to loosen its anti-robot restrictions. One morning, he is discovered outside his home, his chest imploded by an energy blaster. The New York police commissioner charges Elijah with finding the murderer, in cooperation with a highly advanced robot named R. Daneel Olivaw who is visually identical to a human.

Next title
06: The Naked Sun

Next title
02: The Naked Sun