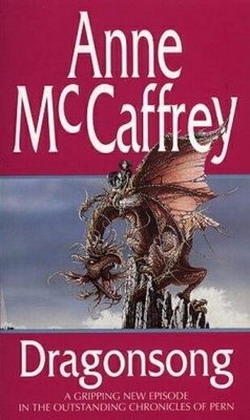 novel no. 04 in the Series:Dragonriders of Pern

Dragonsong is a science fiction novel by the American-Irish author Anne McCaffrey. Released by Atheneum Books in March 1976, it was the third to appear in the Dragonriders of Pern series by Anne or her son Todd McCaffrey. In its time, however, Dragonsong brought the fictional planet Pern to a new publisher, editor, and target audience of young adults, and soon became the first book in the Harper Hall of Pern trilogy. The original Dragonriders of Pern trilogy with Ballantine Books was not completed until after the publication of Dragonsong and its sequel.

Dragonsong and the second Pern book Dragonquest are set at the same time, seven years after the end of the seminal Dragonflight — that is, more than 2500 years after human settlement, during the "Ninth Pass" of the Red Star that periodically brings a biological menace from space. Their primary geographical settings are not distant in space yet worlds apart: Dragonsong in an isolated sea-hold and Dragonquest at the centers of Pernese society, the weyrs and major holds, especially Benden Weyr. Near the end of Dragonsong, the protagonist Menolly is rescued by a dragonrider, and the action converges with that of Dragonquest.