A Wizard In Mind 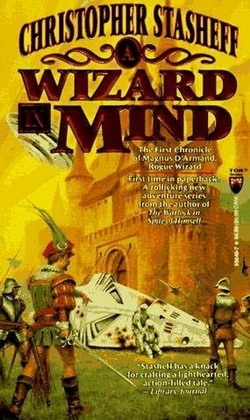 novel no. 02 in the Series: Rogue Wizard

Magnus D'Armand, the renegade son of Rod Gallowglass, Warlock of Gramarye, has set out to prove himself twice the hero and liberator his father ever was. However, Magnus has inherited not only his father's awesome psychic gifts, but his uncanny knack for getting into trouble as well.

Bored and in search of excitement, Magnus D'Armand has asked his sentient starship to find him a world in need of revolution. But on the lost colony world of Petrach, he finds far more than he's bargained for. Not only is the merchant city of Pirogia's fledgling republic about to be wiped off the map by an alliance of nobles determined to maintain aristocratic rule, but the lords are backed by shadowy and powerful off-world organizations interfering with the planet for their own self-serving reasons. Even the Rogue Wizard will need a miracle to keep Pirogia alive and free against such odds!

Previous title
01: A Wizard In Absentia

Next title
03: A Wizard In Bedlam