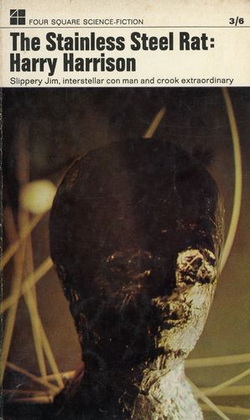 Novel no. 04 in the Series: The Stainless Steel Rat

Jim believes he has pulled off a successful bank job, but is out-conned into working for the Special Corps, the elite law-enforcement and spy agency led by the former greatest crook in the Galaxy, Harold P. Inskipp, and composed mostly of ex-criminals like him. He believes he has escaped from the Corps, and meets his love interest, Angelina - also a criminal genius, but lacking in Jim's relatively high moral codes and strictures against killing. She is building an illegal space battleship on an otherwise peaceful planet. Angelina was born unattractive and committed crimes to pay for her transformation into a beautiful woman; her psychological traumas are treated when Jim captures her, but she retains her allure and her criminal tendencies and joins in the Special Corps as Jim's partner.