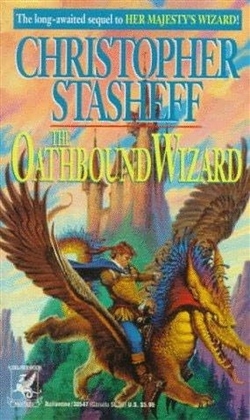 novel no. 02 in the Series: Wizard In Rhyme

Matt Mandrell, unsuspecting graduate student, never imagined his research would lead him to a strange scrap of parchment that would change his life forever. . . .

Crossing the void of time and space, Matt is whisked away to an enchanted world where speaking in rhymes works the most dazzling magic. There he wins not only fame and power as the Lord High Wizard, but the heart of the beautiful Queen Alisande. His dreams are shattered, though, when he learns that he can’t marry his true love; wizard or not, Matt is just a commoner in this bizarre land.

So Matt makes a foolish vow: to conquer a kingdom, any kingdom, if that’s what it takes to claim his bride. But, as Matt discovers, in this world of enchantment, such an oath cannot be broken. He has truly committed himself to win a crown or die trying.

In search of lands to conquer, Matt sets his sights on neighboring Ibile, where the evil Gordorgrosso rules with an iron fist and sinister magic. Matt marches off against the tyrant, gathering a small band of unlikely allies, including a surly dracogriff, a well-spoken cyclop, and a damsel in distress. But against Gordogrosso’s foul genius, Matt is going to need much more than a few stout-hearted companions and some clever rhymes. . . .

Next title
03: The Witch Doctor