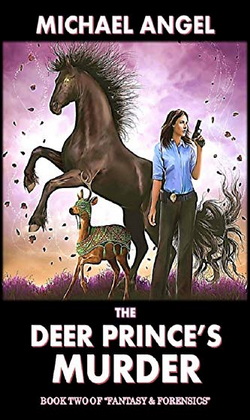 novel no. 02 in the Series: Fantasy And Forensics

LAPD crime scene analyst Dayna Chrissie’s got her hands full when the magical deer of the Fayleene Woods task her friend Prince Liam with proving his worth - by committing a murder!

But they don’t want him to kill some random being: Liam’s target is Sirrahon, an ancient stone dragon who’s threatening the Fayleene Realm and possesses the nastiest disposition in recorded history.

Dayna’s going to put her life on the line for her friend. So will a centaur wizard, a griffin warrior, and a nightmare delivering pooka with a crippling problem preventing him from doing his job.

But with a bloodthirsty dragon, hostile medieval lords, and an old enemy from a long-ago war stacked against her, how can she hope to prevail?

Previous title
01: Centaur Of The Crime