The Conspiracy Of Unicorns 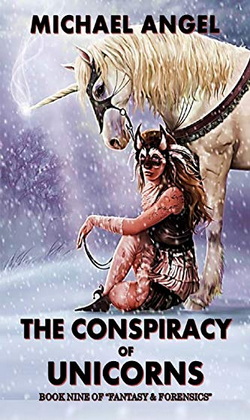 novel no. 09 in the Series: Fantasy And Forensics

Dame Chrissie's got to unravel a conspiracy to commit murder among the mages.

When Dayna investigates the senior members of the Wizard's Guild, she finds that they're hiding both their location and their identities. With her friends' help, it's up to her to find out whether the mages are in the service of the Light...or the Darkness!

Now that Crossbow Consulting's under suspicion for multiple crimes, the officers of the Los Angeles Police Department are under a brutal Internal Affairs microscope. Dayna's got to play it cool...while Chief Robert McClatchy moves to destroy her plans once and for all.

Dayna's got no margin for error as she threads the path between a murder investigation in one world and a catastrophically explosive threat in the other!

Previous title
08: A Warrant Of Wyverns

Next title
10: Dragon With A Deadly Weapon