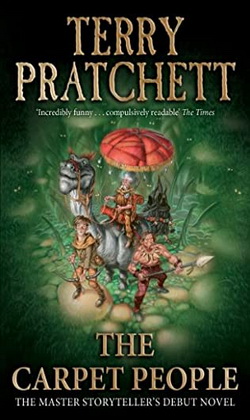 The is magic in every carpet. Cities and villages exist right under your feet and the people who live in them are so small that each tuft of wool stretches high above them like giant trees. A grain of sugar which has somehow found its way into the world of the carpet people, becomes a favourite mountain for the carpet animals where they go as often as possible. Dust plants make up a wonderful vegetation, and the world of the carpet people is as real to them as the earth is to us.

But there are also creatures who live in the underlay; they appear to be allies of that terrible and powerful Fray who lives above the carpet. Whenever he passes above, he leaves destruction behind him in the world of the carpet people, and the creatures of the underlay try to take advantage of them.

This is the story of Snibril and Glurk, the leaders of the carpet people and how they finally defeat the servants of Fray. It is full of magic battles and the day to day struggle of the brave and ingenious carpet people.

Children of all ages, from 5 to 50 will enjoy this book, and the world of the Carpet People in the reader's own home will add a new dimension to his imagination.. . .