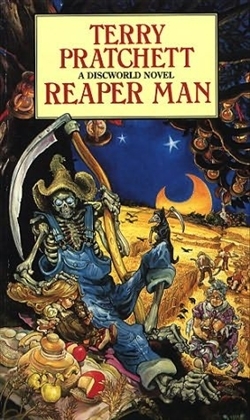 novel no. 11 in the Series: Discworld

Which leads to the kind of chaos you always get when an important public service is withdrawn.

Ghosts and poltergeists fill up the Discworld. Dead Rights activist Reg Shoe - 'You Don't Have to Take This Lying Down' - suddenly has more work than he had ever dreamed of. And newly deceased wizard Windle Poons wakes up in his coffin to find that he has come back as a corpse.

But it's up to Windle and the members of Ankh-Morpork's rather unfrightening group of undead (*) to save the world for theliving.

Meanwhile, on a little farm far, far away, a tall, dark stranger is turning out to be really good with a scythe. There's a harvest to be got in. And a different battle to be fought.

(*) Arthur Winkings, for example, became a vampire after being bitten by a lawyer. Schleppel the bogeyman would be better at his job if he wasn't agoraphobic and frightened of coming out of the closet. And Mr Ixolite is a banshee with a speech impediment, so instead of standing on the roof and screaming when there's a death in the house he writes 'OooEeeOooEeeOoo' on a piece of paper and pushes it under the door.