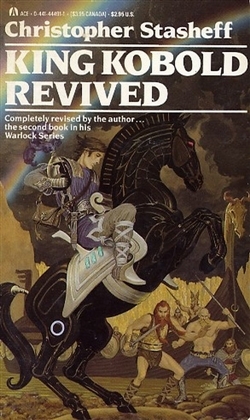 novel no. 02 in the Series: Warlock Of Gramarye

Christopher Stasheff wrote the original King Kobold in 1971. Twelve years later, based on feedback from readers as well as his own personal dissatisfaction with the book, he decided to rewrite the story.

While King Kobold Revived follows the same basic outline as the original 1971 edition, the book has been totally redone. The author had twelve years between the two writings to mull things over and it shows. The plot is much tighter, the characters much more developed and the writing more fluid.

Enter the fantastic world of Gramarye once again, where magic lives with science and the Warlock in Spite of Himself, Rod Gallowglass, is once again called upon to save the planet from marauding evil…if he can overcome the insidious mental fog that clouds his mind and threatens his powers.

Previous title
01: The Warlock In Spite Of Himself

Next title
03: The Warlock Unlocked