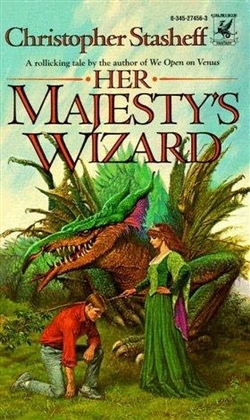 novel no. 01 in the Series: Wizard In Rhyme

Matt didn't know the scrap of parchment was a trap. So he read the runes - and found himself on a world where reciting poetry verses worked magic. His first effort got him locked in a dungeon by the evil sorcerer Malingo. Trying for light, he brought forth a fire-breathing, drunken dragon, who told him Princess Alisande, rightful ruler of Merovence, was also held in the dungeon.

Naturally, he had to free her, himself, and the dragon, using poetry lifted from Shakespeare. And because she was young and beautiful, he swore to serve as her wizard. Then he learned that his job as wizard was to fix it so the three of them could overcome all the dark magic and armies of Malingo!

The addition to the party of a lust-witch and a priest who became a werewolf now and then didn't seem much help. Matt figured he had got himself into quite a predicament.

For once, he was right!

Next title
02: The Oathbound Wizard