Forgery Of The Phoenix 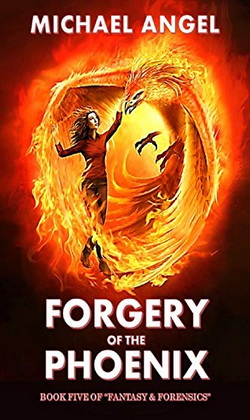 novel no. 05 in the Series: Fantasy And Forensics

When a fiery phoenix appears in the King's throne room, Dayna's called in to save the species before their flames gutter out!

Even as Dayna leaves for the mysterious Vale of the Seraphine, she gets a warning from Albess Thea. The elderly owl fears treachery even as Dayna’s centaur, fayleene, and griffin companions join her.

But that’s not all - Dayna finds out that she's been joined to the pathetic knightly organization, the 'Order of the Weasel.' Worse, she's now liable for their mountain of unpaid debts. To top it off, she's blamed for setting knights against one another in combats to the death.

And just as everything hits rock bottom, newly elected Police Chief Robert McClatchy begins his campaign to destroy all that Dayna holds dear!

How can Dayna triumph against enemies in both worlds before the Creatures of the Dark strike another devastating blow?

Previous title
04: A Perjury Of Owls

Next title
06: Assault In The Wizard Degree