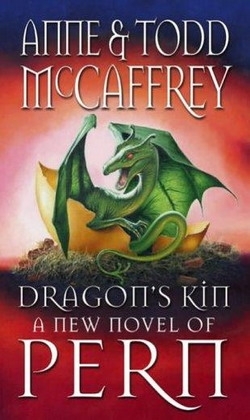 novel no. 19 in the Series: Dragonriders of Pern

The story tells how the people of the fictional planet Pern discover the special abilities of the watch-whers or whers, a distant relative of the dragons. Subsequently, these beasts are used in mines to warn miners of gas pockets and also to locate stranded miners, should there be a cave-in.

The story begins some years before the 3rd Pass in Camp Natalon, a mining camp. There, the reader is introduced to a young boy Kindan, whose father owns a watch-wher called Dask. During a mining cave-in, Kindan loses his entire family as well as Dask, and is adopted by the Master Harper Zist, who begins to train him to be both an entertainer and a spy, something that Harpers do. This is how Kindan learns that the camp is divided into two parties, Natalon's and his uncle Tarik's

Meanwhile, the camp is without a watch-wher and minor accidents keep delaying the work. Despite the protests from Tarik and his group, Natalon decides to trade an entire winter's worth of coal for a chance for Kindan to ask a queen watch-wher for an egg. He succeeds and begins the difficult task of raising a nocturnal animal. As no records exist on how to raise or train the watch-wher, Kindan has no clue but is luckily aided by the mysterious Nuella. Together, they train Kisk and, in the process, learn a great deal about this species. This proves to be vital as, towards the end of the novel, Kisk's abilities will save many lives, including that of the camp leader, Natalon.

Previous title
18: A Gift Of Dragons