Dragon With A Deadly Weapon 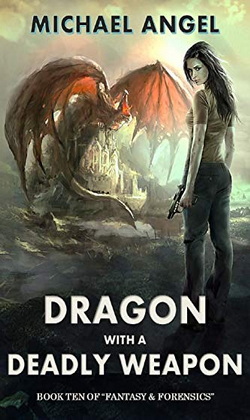 novel no. 10 in the Series: Fantasy And Forensics

When a lone gunman attacks Crossbow Consulting's corporate headquarters, Dayna's got a multiple homicide on her hands. But what leads can she chase down when security cameras show the murderer vanishing into thin air!

Time's running out for both worlds. Dayna's desperate to bring King Fitzwilliam back to his throne. She's also got to confront the Deliberati over their mysterious withdrawal to the Everwinter Glade. And most important of all, she must face the prophecy that says the creature who sleeps in the Scarlet Crypt shall end her.

Dayna's investigation crosses back into Andeluvia as the appearance of a legendary Dragon Knight threatens to undo all her work. The last pieces of prophecy fall into place as the final attack upon Dayna and her friends threatens to destroy the entire kingdom in a single blow!

The land of Andeluvia faces the ultimate catastrophe unless Dame Chrissie stands fast until the very end!

Previous title
09: The Conspiracy Of Unicorns