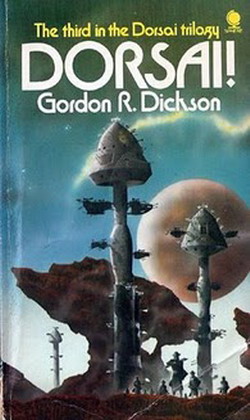 Novel no. 04 in the Series: Childe Cycle

The book is about Donal Graeme, warrior extraordinaire. In the Childe Cycle universe, the human race has split into a number of splinter cultures. Donal is a member of the Dorsai, a splinter culture based on the planet of the same name, which has specialized in producing the very best soldiers. Since each splinter culture specializes in a specific area of expertise, a system of trade labour contracts between the cultures allows each planet to hire the expertise they need. The Dorsai, inhabiting a resource-poor world, hire themselves out as mercenaries to other planetary governments. Donal has great ambitions, and the book follows his rise in an episodic manner. The book begins as a straightforward tale of his career and then becomes something else, as it becomes clear there is something different about Donal Graeme himself.