Children Of The Lens 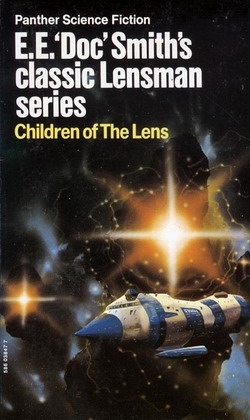 novel no. 06 in the Series: Lensman

Children of the Lens is a science fiction novel by American author E. E. Smith. It was first published in book form in 1954 by Fantasy Press in an edition of 4,874 copies. It is the last book in Smith's Lensman series. The novel was originally serialized in the magazine Astounding beginning in 1947.

The Children of the Lens are the culmination of the Arisian breeding program, and are to be their weapons in the final assault on Eddore. The book introduces the five Kinnison children: Kit, Camilla, Constance, Karen, and Kathryn. Born with the abilities that Second Stage Lensmen possess only through years of intensive training, they become the Third Stage Lensmen with abilities that even the Arisians do not fully understand. Here, battles between massive fleets and super-weapons no longer have the main role. The battles may be just as intense, but most are more low-key, with brains and subtle maneuvering being more important than who has the biggest fleets and most powerful weapons.

Next title
07: Masters Of The Vortex