Centaur Of The Crime 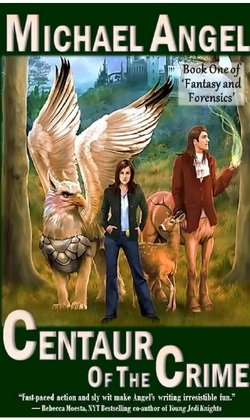 novel no. 01 in the Series: Fantasy And Forensics

She's the LAPD's best corpse-kicker. Dayna Chrissie, LAPD's leading Crime Scene Analyst, relishes finding the one clue that can solve a crime. When she finds a golden medallion on a body that's been dumped at a downtown construction site, she doesn't think it's all that unusual. Until that medallion's enchantment brings her to the magical world of Andeluvia.

She must find a killer in time to stop a war. Dayna discovers that she's been summoned to solve the murder of the realm's king before war breaks out between Andeluvia and the Centaur Realm. But no one wants peace when war offers chances for riches and glory. So Dayna ends up with a team of cast-offs: a centaur wizard with father issues, a brash griffin warrior, and the world's unluckiest magical deer.

And the trail leads where she least expects it...back home! When the trail of evidence brings Dayna and her new friends back from Andeluvia to Los Angeles, she must use all of her forensic knowledge in order to solve the case.

The price of failure? A war that will kill millions and devastate Andeluvia.

Being a fan of fantasy/sci-fi and detective stories, when this title appeared under offer in an email from the fussy Librarian, I was intrigued. Once I had started, the style of writing and the mixture of characters and backgrounds had me hooked. From being halfway through I was looking forward to the next book in the series. I thoroughly recommend this book to anyone who wants to get involved with the stories. It is more than worth it.

Next title
02: The Deer Prince's Murder