Assault In The Wizard Degree 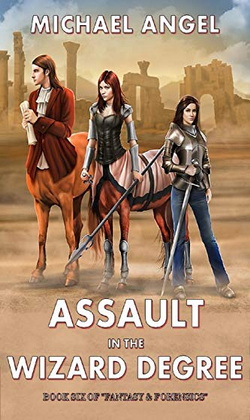 novel no. 06 in the Series: Fantasy And Forensics

King Fitzwilliam's pressuring her to select a knight to represent her at the Spring Tournament. And to make matters worse, the Master Seer of the Soothsayer's Guild prophesizes imminent doom and disaster for the entire Kingdom!

Just as these dark omens are brought to light, a plea for help arrives from King Angbor of the Centaurs. One of his best warriors stands accused of sacrilege, and only Dayna's talents can decide their guilt or innocence.

Worse, strange lights and shadows are seen in the centaur Hinter Lands. Whispers of ancient demons arise in the farthest wastes. And Dayna's investigation into Grayson Archer's consulting firm runs into a snag that's right out of her worst nightmares!

How can Dayna Chrissie weather the storm as the Creatures of the Dark finally push Andeluvia into open war?

Previous title
05: Forgery Of The Phoenix

Next title
07: Trafficking In Demons