A Wizard In War 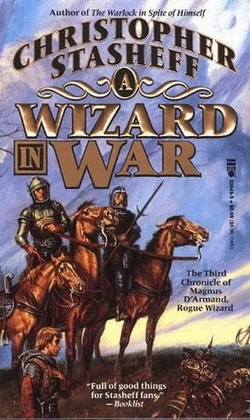 novel no. 04 in the Series: Rogue Wizard

The medieval planet of Maltroit seems to be repeating Earth's bloody history in the worst possible manner: endless feudal warfare, at the expense of peasants just trying to survive. It's up to the Rogue Wizard to give the downtrodden a crash course in revolution, and set in motion a plan for the common soldiers to take back power and end the bloodshed.

Disguising himself as a mercenary soldier, teaching nobles the rudiments of democracy and schooling peasants in the basics of radical politics, before you can say "Magna Carta," the Rogue Wizard has bent the course of history and set the planet on a course toward peace and democracy.

Previous title
03: A Wizard In Bedlam

Next title
05: A Wizard In Peace