A Wizard In Bedlam 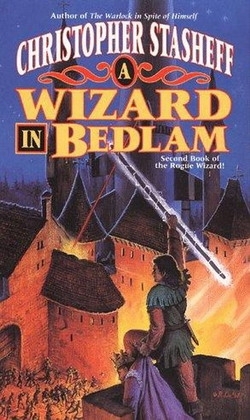 Novel no. 03 in the Series: Rogue Wizard

The revolutionary DeCade died generations ago, leading the last great revolt of the planet Melange's churls against their despotic feudal masters. His staff and bones were broken and lost; only his songs remain.

The churl Dulain joined the Resistance in his youth - an exile Resistance, devoted to readying the churls for their next great attempt at freedom. Now that moment finally nears. Back on Melange for the first time in years, Dulain must now hasten that revolt... or die.

The Giant Gar is the mysterious stranger whom no one knows, a power greater than he seems. More powerful, perhaps, than churls, masters, or even the Resistance..

Previous title
02: A Wizard In Mind

Next title
04: A Wizard In War