A Wizard In A Feud

Previous title 09
A Wizard In The Way 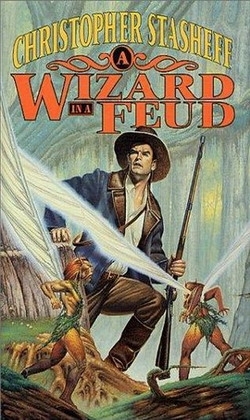 published in 2001 by Harper Collins

novel no. 10 in the Rogue Wizard series

When Gar Pike - the Rogue Wizard - and his traveling companion Alea land their ship on a planet harboring a lost colony to do some minor repairs to the ship's computer, they decided to take some time for shore leave, and explore. It's not long before they meet one of the indigenous life forms of the planet: Fairies.

As Gar and Alea explore more of the world and meet more of the inhabitants, they quickly come to realize that every clan is feuding with their neighboring clans. Though everyone secretly wants peace, nobody will listen to those with the courage to preach it, those who have been sent into exile for wanting everyone to get along.

Posing as traders and healers, Gar and Alea team up with the Fairies, the Wee Folk, the Druid priests, and two particularly courageous exiles to reintroduce the abandoned Druidic religious tradition to the people and, hopefully, reintroduce peace to all the clans.

Under the nom de guerre of Gar Pike, renegade psychic wizard Magnus D'Armand travels the stars fighting injustice and oppression, like his father, Rod Gallowglass, the Warlock in Spite of Himself. But unlike his famous father, Magnus refuses to play by the rules, sowing the seeds of freedom and revolution throughout the galaxy.

When Gar and Alea land their ship on a planet for computer system maintenance, they aren't expecting to run into Fairies, Wee Folk, Druid priests, and feuding clans transplanted from Scotland and then forgotten. Can they, along with two courageous exiles and the psychic powers of the Fairies, and Wee Folk, bring peace and order to this world?

Previous title 09
A Wizard In The Way