A Warrant Of Wyverns 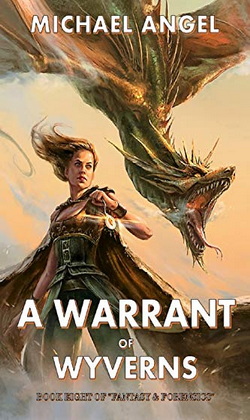 novel no. 08 in the Series: Fantasy And Forensics

Dame Chrissie's given her most dangerous mission yet!

The Regent wants to find out who's directing the wyvern attacks on Andeluvia. Those answers can only be found within Keshali, the ghostly city deep within the Hinter Lands. So Dayna's given a warrant to find out what lies beneath the haunted ruins!

But someone's playing a deadly game with her in Los Angeles. Dayna's got her hands full in Los Angeles as a murderer starts leaving gristly clues in her path. But both the LAPD and OME seem determined to leave her to face this mystery on her own.

Even if she rises to the challenge, can Dayna survive the return of a terrifying creature from Andeluvia's ancient past?

Next title
09: The Conspiracy Of Unicorns