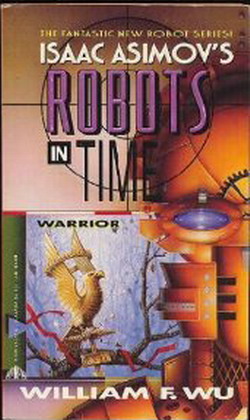 novel no. 03 in the Series: Robots In Time

MC Governor, the largest and smartest robot ever built, knew its destruction was imminent. It used the Third Law of Robotics-A robot must protect its own existence-to break itself down into six smaller robots and scatter them throughout Earth's past. It didn't realize that time travel would cause a change in its molecular structure. Now, if the robot's six parts are not found and returned to their own time, they will explode in a nuclear inferno, destroying humanity's future forever! Only an experimental robot named Hunter and his team of human experts can find and disable the MC Governor robot lost in the chaos of the Roman Empire's collapse. Their target is a robot who will risk all of history to escape them. A robot turned warrior.