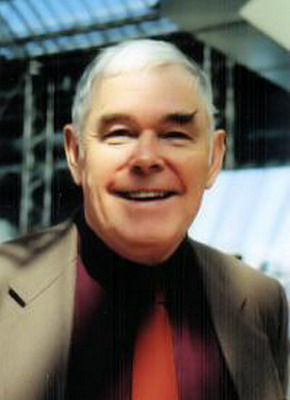 Hogan was born in London, England. He was raised in the Portobello Road area on the west side of London. After leaving school at the age of sixteen, he worked various odd jobs until, after receiving a scholarship, he began a five-year program at the Royal Aircraft Establishment at Farnborough studying the practice and theory of electrical, electronic, and mechanical engineering. He first married at the age of twenty. He married three more times and fathered six children.

Hogan worked as a design engineer for several companies and eventually began working with sales during the 1960s, traveling around Europe as a sales engineer for Honeywell. During the 1970s he joined the Digital Equipment Corporation's Laboratory Data Processing Group and during 1977 relocated to Boston, Massachusetts to manage its sales training program. He published his first novel, Inherit The Stars, during the same year to win an office bet.

He quit DEC during 1979 and began writing full-time, relocating to Orlando, Florida, for a year where he met his third wife Jackie. They then relocated to Sonora, California. Hogan died of heart failure at his home in Ireland on Monday, 12 July 2010, aged 69.