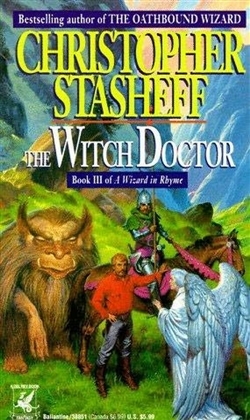 novel no. 03 in the Series: Wizard In Rhyme

Saul didn't have so many friends that he would give one up without a fight. So when Matt disappeared, Saul started a search that led through Matt's kitchen window -- straight into a world of magic and desperate danger!

Saul discovered that in this world, his love of verse made him a wizard. But his newfound magic earned him a dreadful foe: Queen Suettay, a false monarch without peer for wickedness and corruption. A fearsome sorceress herself, with armies steeped in evil ready to obey her every sinful command, she determined to break Saul's growing power -- or win his soul for Satan.

Fortunately, Saul earned some stalwart friends, as well: Gruesome the troll and young Squire Gilbert; Saul's own guardian angel, and the beautiful -- if unsubstantial -- Angelique. But he'd need the help of the mysterious Spider King to spin a web strong enough to trap this tyrant!

Next title
04: The Secular Wizard