The Stainless Steel Rat Wants You 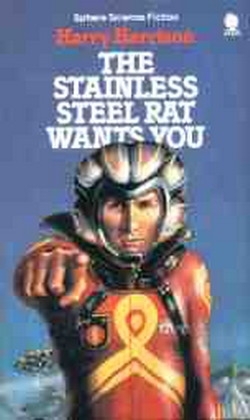 Novel no. 07 in the Series: The Stainless Steel Rat

Slippery Jim di Griz - the Stainless Steel Rat - is still recovering from his efforts to save his beloved Angelina from the notorious Interstellar Internal and External Revenue when he is called upon to perform the impossible. Saving the galaxy. But can he pull it off? The galaxy is being attacked by every kind of alien race - untold billions of tentacled, slimy, green, clawed mutations - and time is running out. Aided and abetted by his wife Angelina and his teenage sons, James and Bolivar, Jim infiltrates the nerve centre of the enemy council chambers. But he hasn't reckoned on the grey men and their commitment to a 'holy crusade' to destroy mankind - permanently!

Next title
08: The Stainless Steel Rat For President