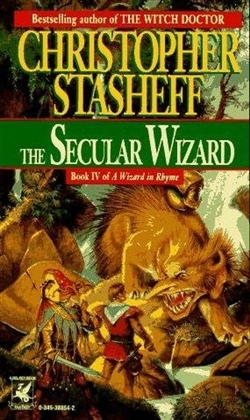 novel no. 04 in the Series: Wizard In Rhyme

In sunny Latruria, the wicked old king was dead, and the new king spurned the rule of Evil. But turmoil began to spread, even across the border, when the new king also resisted Good! In nearby Merovence, Lord Wizard Matt Mantrell donned a disguise and set off to investigate -- never dreaming that Latruria's sinister prime minister was mobilizing his minions . . .

"Minstrel" Matt sang his way south, dodging deadly enemies and music critics alike. He was teamed with a lovesick lad, menaced by a manticore, haunted by a ghost from Greece, and swept along in a flood of youngsters fleeing the provinces for the "glamor" of the city. But when they all washed up in the capital, harsh reality awaited them, not gold-paved streets.

And even harsher reality awaited Matt. The Lord Wizard faced the ultimate test of magic -- and he would need a lot of help to pass!