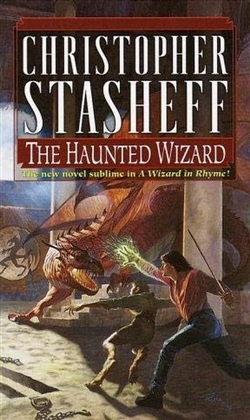 novel no. 06 in the Series: Wizard In Rhyme

There's little love lost between the kindly monarchs of Merovence and the scheming sovereigns of Bretanglia. But when the brutish Prince Gaheris - heir apparent to the Bretanglian throne - is murdered during a brawl in a Merovence tavern, any pretense of civility between the two kingdoms flies out the window faster than the mysterious brigand who committed the dastardly deed.

While the outraged king and queen of Bretanglia declare their intention to lay siege to Merovence, royal wizard Matthew Mantrell suspects the slain prince was done in by one of his own "loyal" subjects.

As both sides gird for battle, Matt sets out - with trusty dragon in tow - to catch the killer. But the road to royal justice is rocky indeed, and a powerful sorcerer, a sinister cult of false druids, and a mischievous spirit are just some of the obstacles Matt must conquer - by wit or wizardry - to save his enchanted land from unholy forces of darkness . . .

Previous title
05: My Son, the Wizard

Next title
07: The Crusading Wizard