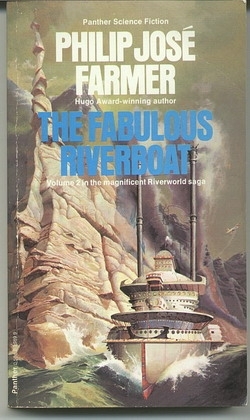 Novel no. 02 in the Series: Riverworld

Twenty years after humanity was resurrected on Riverworld, Sam Clemens (Mark Twain) is traveling with the crew of a Viking longboat, captained by Eric Bloodaxe, who is notable for having an axe made of metal. On the metal-poor Riverworld, where even a few ounces of metal is a treasure, this is a rarity. Clemens and Bloodaxe have allied in order to find the source of this metal. Clemens is accompanied on his quest by a gigantic prehistoric hominid whom he has named Joe Miller. Miller, despite being very cordial, and talking with a lisp, is a fearsome warrior because of his size, and protects Clemens from Bloodaxe's crew. Clemens is also motivated in his quest by his desire to be reunited with his terrestrial wife, Livy.

Next title
03: The Dark Design