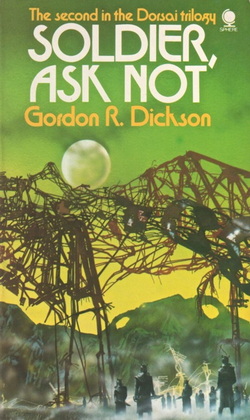 Novel no. 03 in the Series:Childe Cycle

When mankind burst into the stars, the human psyche splintered - and humanity became many species, each a specialized overdevelopment of a single trait. Tam Olyn was a trained new observer from Old Earth - a complete man. To him the conflict between the fissuring worlds was at first a challenge, then a personal vendetta. The Friendlies were his enemy... in them blind fanatical faith had become an all-abiding obsession. The Dorsai were warrors, born and bred, but they had not used their talents for self-glory but had placed them - for a price - at the service of others. And when these two driving destructive talents of humanity met head on, Tam Olyn had a plan of his own for which cosmic humanity was not prepared.