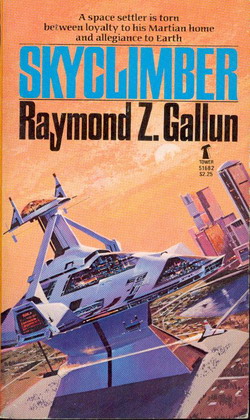 Nebula Recomendee Saga of First Person Born on Mars! The first colony on the red planet is founded amid joy and hope, and the colonists are given every support. Then war sweeps the mother planet and the Mars colonists are abandoned by an Earth that needs every resource for its own survival. Though there are signs the colony could become self-sufficient in time, the colonists don't have that time. They face slow and certain death. However, Timothy Davis Barlow, nicknamed Skyclimber, the first person to be born, and grow up, on the red planet, believes he knows how to change Earth's mind. He plans a stellar stunt that dwarfs Lindberg's crossing of the Atlantic and soon has every living soul on the mother world glued to their video screens. But when Tim arrives on Earth to cheering crowds, he discovers his real job has just begun. There he faces social and political challenges that make survival on Mars seem simple. He also finds love, with a woman who shares his vision of the farthest reaches of the galaxy. But even Tim grows daunted when he realizes just how big Earth really is and how many people still swarm its surface. Can one person really change the hearts and minds of so many billions? Don't miss this 1981 Nebula Recomendee novel. It's a mix of hard science and human emotion that only a grandmaster like Raymond Z. Gallun could have penned.