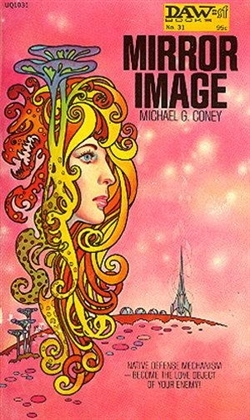 If an alien creature can so perfectly imitate a human being that not only is it physically and mentally indistinguishable from a man but it actually believes itself to be one, what do you do with it? Is it human?

This is the question which confronts Alex Stordahl, supervisor of the harsh planet Marilyn. Initially nobody had suspected anything unusual about the largely reptilian animal life. Then Stordahl discovered the amorphs - shapeless in their natural state, but possessing a unique defence mechanism: when closely approached by a possible aggressor, they could adopt the form least likely to be attacked by the creature.

When it transpires that the creatures are harmless they are quickly absorbed into the colony to provide extra labour. The the ruthless owner of the development corporation arrives from Earth. He wants to test the amorphs, and brings with him a group of four brilliant, but totally egotistical men. And trouble soon starts...