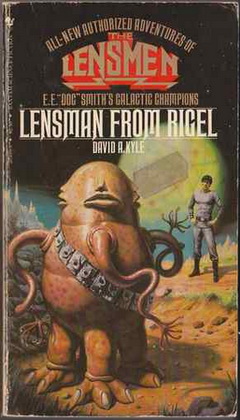 novel no. 2 in the Series: Second Stage Lensman

Following the events of The Dragon Lensman (the first book in the "Second Stage Lensman" Trilogy), Tregonsee is made violently aware of a deadly new threat to the forces of Civilization when he is targeted for assassination by an unknown power capable of precisely controlling hyperspatial tubes -- portals that fold the fabric of space-time itself to make possible instantaneous, untraceable transportation anywhere in the universe. This feat is beyond any technology known to Civilization, and at a stroke it renders nearly every existing security measure obsolete. Though he survives the attempt, Tregonsee acts quickly to spread news of his death to try and lure the conspirators into the open. But even before he can put his plan into action, five of Civilization's greatest scientists are kidnapped through the same hyperspatial tubes -- only to be quickly returned, seemingly unharmed but with their brains obviously manipulated. The scientists' specialties? Hyperspace, vortices, and black holes. As more reports come in from Tregonsee's intelligence network, it soon becomes clear that the Galactic Patrol and all of Civilization is in even greater danger than it first appeared -- now they face the possibility of black holes being sent down tubes as targeted weapons!

While Tregonsee and the other Second Stage Lensmen begin mounting their defense and planning their response to this growing menace, a lower-level Patrol technician named Benson "D.D." Cloudd is about to bring them a vital piece of the puzzle. Hunting a mysterious plague of mechanical probes that have been appearing throughout the galaxy, Cloudd manages to capture a piece of a "mother ship" with several intact probes within. What he discovers next leads him into the inner circle of Tregonsee and his ultra-secret Special Mission Forces, where preparations are underway to follow the trails of the attackers back to their source.

For Cloudd and Tregonsee, that means a fateful mission to the planet Tanse and its mysterious Moon of Lost Souls, where roiling hurricanes of psychic energy rage, ready to destroy the minds of any who attempt to land on its surface. Behind this shield, awaiting discovery, is the key to all that Tregonsee has uncovered -- a secret that can either save Civilization, or destroy an entire galaxy!