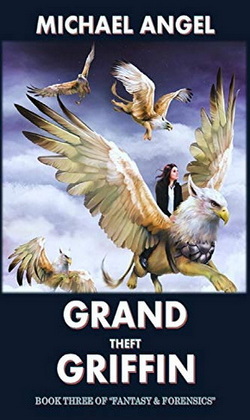 novel no. 03 in the Series: Fantasy And Forensics

Dayna Chrissie’s got a perplexing case – one where a set of crystals have been stolen from a Los Angeles museum. No one believes the eyewitness…because he claims the thief’s a creature with an eagle’s head and lion’s body!

It looks like Dayna's got a griffin to track and bring in. She'll call on the help of a police detective and a centaur wizard to start. But she'll need Grimshaw, her griffin friend from the Air Cavalry, to get her where she needs to be: inside the Griffin Kingdom to live cheek-by-jowl with an entire aerie of deadly avian warriors.

Can Dayna find a criminal among the teeming cliffs of a griffin city? Even with Shaw's offspring on her side - three very grown, very lethal offspring, at that - can Dayna's forensics skills solve the mystery?

If she fails, the griffins face a disaster beyond their wildest imaginings!

Next title
04: A Perjury Of Owls