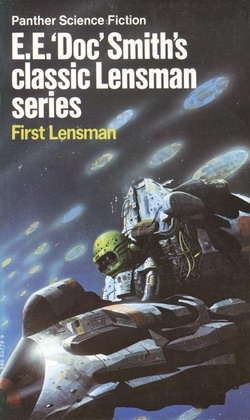 novel no. 02 in the Series: Lensman

First Lensman is a science fiction novel and space opera by American author E. E. Smith. It was first published in 1950 by Fantasy Press in an edition of 5,995 copies. Although it is the second novel in the Lensman series, it was the sixth written. The novel chronicles the founding of the Galactic Patrol by Virgil Samms, the first sentient being in our cosmos to wear the "Lens", a unique badge of authority which is actually a form of "pseudo-life" that grants telepathic powers to the defenders of Civilization