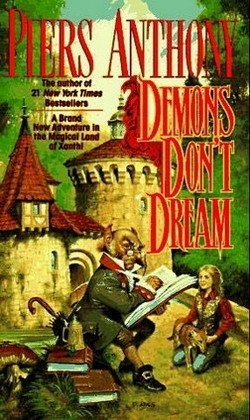 Sixteen-year-old Dug has yet to be impressed by a computer game, but that’s before he gets hooked by Companions of Xanth—and the beguilingly beautiful princess-serpent he’s chosen to guide him. Nada Naga has her work cut out for her keeping Dug’s eyes on the magical prize . . . and off of her human form.

Kim is no stranger to Xanth, which is why she chooses her favorite companion, Jenny Elf, to accompany her through its marvels—and dangers. Though Kim’s hyper-enthusiasm is infectious, she doesn’t really believe that Xanth is real, and it’s up to Jenny to prove it.

What the two players don’t know is that there’s more at stake than winning; the very existence of Xanth hangs in the balance. Demons may run the game, but there are voids to avoid, loan sharks to outswim, and Com Pewter—the most evil machine of all—to outwit. Not to mention that a companion may be just as willing to sabotage Dug and Kim as help them succeed .

Previous title
15: The Color Of Her Panties