A Wizard And A Warlord 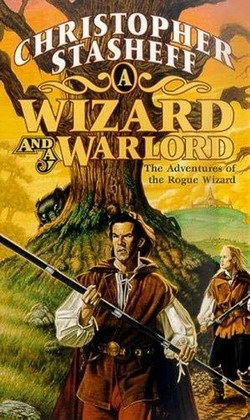 novel no. 08 in the Series: Rogue Wizard

During his last fight for peace and democracy on a forgotten planet, the interplanetary liberator Gar Pike somehow managed to get himself a new traveling companion: Alea, a young with a certain amount of psychic ability - and a heavy dose of attitude to boot.

Now the ship feels like it's shrinking, and Alea's always around, asking questions, sticking her nose in, and tensions are rising. But when they finally land on their next target planet, it's... strange. There doesn't seem to be ANY government to overthrow, good or bad, yet life still seems to be orderly, peaceful, and happy.

Until a forest outlaw builds an army and starts conquering villages, that is. With no government and no military, there's nothing and no one to stop him. The locals pray the mythical "Scarlet Company" will, but it's nowhere to be seen... and may not even exist.

Can Magnus and Alea alone save these peaceful people from brutal conquest? One thing is clear: when a wizard and a warlord square off, you can expect the unexpected.

Previous title
07: A Wizard In Midgard

Next title
09: A Wizard In The Way