Next title 01
The Warm Machine 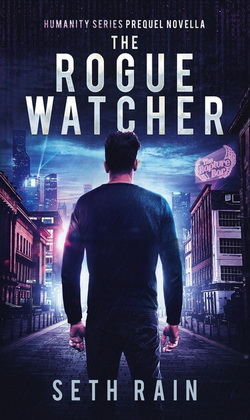 published in 2019 by Human Fiction

Prequel novella in the Humanity series

Scott knows he will die on April 22nd.

He just doesn't know which year.

Scott's friend, also one of the Chosen 144,000 men, has gone missing. As this happens on the date his friend is told he will die, Scott does all he can to find him.

But soon, Scott learns that the notion of free will, choice, and sacrifice, mean different things in a world now mapped by the most advanced Artificial Intelligence humanity has ever witnessed.

Read The Rogue Watcher and enter a near-future dystopian Britain coming to terms with the clash between religious fervour and scientific determinism.

It's not the end of the world... only humanity!

A very interesting and very difference concept. I downloaded the Rogue Watcher from Seth Rain and read it in one sitting.

Very intrigued as to what will happen next, I now have Book 1 and will start it as soon as I have had some sleep. (It's just gone Midnight here!)

To any who want something different, I don't think you will be wasting your time.