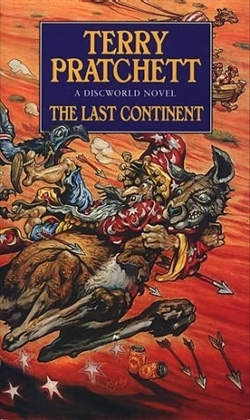 novel no. 22 in the Series: Discworld

This is the Discworld's last continent, a completely separate creation.

It's hot. It's dry . . . very dry. There was this thing once called The Wet, which no one now believes in. Practically everything that's not poisonous is venemous. But it's the best bloody place in the world, all right?

Who is this hero striding across the red desert? Champion sheepshearer, horse rider, road warrior, beer drinker, bush ranger and someone who'll even eat a Meat Pie Floater when he's sober?

A man in a hat, whose Luggage follows him around on little legs, who's about to change history by preventing a swagman stealing a jumbuck by a billabong?

Yes . . . all this place has between itself and wind-blown doom is Rincewind, the inept wizard who can't even "spell" wizard.

He's the only hero left.

Terry Pratchett would like it to be known that "The Last Continent" is not a book about Australia. It's just vaguely australian.

Next title
07: The Last Hero