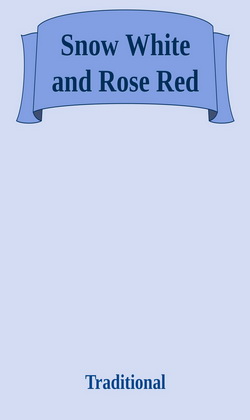 This title remains unpublished in this form.

"Snow-White and Rose-Red" (German: Schneeweißchen und Rosenrot) is a German fairy tale. The best-known version is the one collected by the Brothers Grimm as tale number 161. An older, somewhat shorter version, The Ungrateful Dwarf, was written by Caroline Stahl (1776–1837); this in fact appears to be the oldest variant of the tale, as there are no known previous oral versions, although several have been collected since its publication. The oral variants of this tale are very limited in area.

It is not to be confused with the Grimm fairy tale Snow White (which is written Schneewittchen in German, rather than Schneeweißchen) that provided the basis for the Walt Disney film Snow White and the Seven Dwarfs. This is a completely different version of Snow White and she has nothing in common with the other one other than the fact that she shares her name in English and has an encounter with a dwarf.