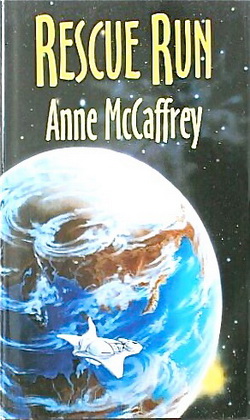 short story in the Series: Dragonriders of Pern

"Rescue Run" follows on from an event described in Dragonsdawn: The unauthorized launch of a distress beacon by a group of dissidents who believed the colony was doomed. Decades later, shortly after the end of the First Pass, this beacon is picked up by a starship in the vicinity of Pern, and a landing party -- under the command of Lieutenant Ross Benden, nephew of the Admiral who commanded the Pernese colonization fleet -- is sent to respond. A quick survey by Lt. Benden's party finds no sign of human habitation on the Northern Continent, where the colony has taken refuge in underground caverns, and finds only one surviving family group in the South, at "Honshu" excavation. The now-elderly Stev Kimmer, a greedy and corrupt original colonist, rules over Honshu and his adopted family with an iron fist. He persuades Lt. Benden that he and the others in Honshu are the only survivors of the biological and geological disaster (i.e. Threadfall), and that they are a group small enough to evacuate entirely. Benden agrees despite his suspicions of Kimmer's true nature, only furthered by speaking to the family that had long lived under his domination, as well as Kimmer's all but openly hostile attitude towards himself (as Kimmer holds Benden's long-dead uncle personally responsible for the "destruction" of the colony). The rescue is dramatically successful, though Kimmer is killed when he is shot out of an airlock (implied to have been "accidentally" opened by one of his "family"). Scientific investigation of Thread, as well as the belief there are no other humans on the planet -- none of the Honshu refugees could refute Kimmer's claim that they were the last survivors of the Pern colony -- leads the Federation to place Pern under strict interdict; the system is considered quarantined, all contact forbidden.