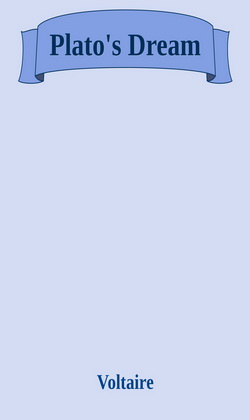 Plato's Dream (1756) is a short story written in the 18th century by the French philosopher and satirist Voltaire. Along with Voltaire's 1752 short story Micromégas, Plato's Dream is considered by many to be one of the earliest works in the genre of science fiction.

Plato's Dream is a pointed philosophical criticism of religious doctrine, and though it is obscured by two layers of dramatic facade (a dream contained within the framework of a famous (and religiously-tolerated) personality of antiquity), Voltaire's intentions are quite clear. His story recounts a "little known" dream attributed to Plato, in which Demiurgos, a god-like entity referred to as the "eternal geometer", charges a number of "lesser superbeings" with the task of creating their own worlds. Demogorgon, the being which ultimately creates the planet we know as Earth, is at first quite pleased with his creation, only to find his eminently imperfect handiwork the subject of ridicule by the other beings. However, the last laugh is had at Demiurgos himself, who is humiliated after declaring himself the only being capable of creating perfection--as he was obviously the creator of the imperfect "lesser superbeings."