Previous title 28
The Amazing Maurice And His Educated Rodents

Next title 30
The Wee Free Men 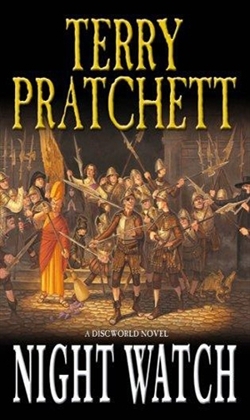 novel no. 29 in the Discworld series

novel no. 6 in the
City Watch series

'Don't put your trust in revolutions. They always come round again. That's why they're called revolutions. People die, and nothing changes.'

For a policeman, there can be few things worse than a serial killer loose in your city. Except, perhaps, a serial killer who targets coppers, and a city on the brink of bloody revolution.

For Commander Sam Vimes, it all feels horribly familiar. Caught on the roof of a very magical building during a storm, he's found himself back in his own rough, tough past without even the clothes he was standing up in when the lightning struck. Living in the past is hard, especially when your time travel companion is a serial killer who knows where you live. But he must survive, because he has a job to do: track down the murderer and change the outcome of the rebellion.

Previous title 28
The Amazing Maurice And His Educated Rodents

Next title 30
The Wee Free Men