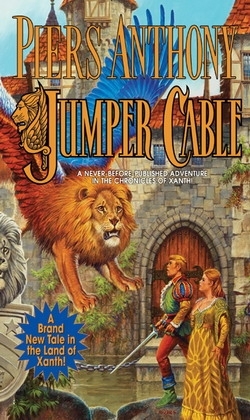 In the thirty-third thrilling escapade in Piers Anthony's rousing Xanth fantasy series, an adventurous arachnid named Jumper must assume human form to save the enchanted realm from a cosmic peril.

A cataclysmic battle between two all-powerful Demons has severed a mystical connection that joins Xanth to our own world. The key to restoring it is hidden within a cryptic prophecy that Jumper discovers when he is suddenly transformed from spider to man. As he sets out to discern the prophecy's meaning, he gathers about him a half dozen alluring damsels who do their best to help him solve the riddle while vying for his attentions.

But a seductive siren and her demonic consort have determined to use their wiles to lure Jumper and his lovely companions away from their urgent mission. In a madcap adventure that is alternately harrowing and hilarious, they soon discover that danger, deception, and even true love may be found where they least expect it.

Previous title
32: Two To The Fifth