Into The Slave Nebula 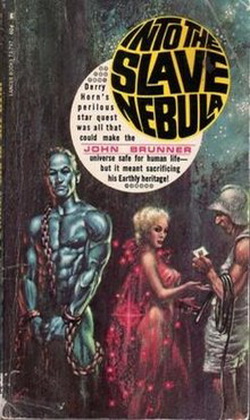 It was carnival time on Earth. Prosperity was at its peak; science had triumphed over environment; all human needs were taken care of by computers, robots and androids. There was nothing left for humans to do but enjoy, themselves . . . to seek pleasure where they found it, without inhibitions and without thinking of the price.

Then an android died - in a senseless, brutal murder. And young Derry Horn was shocked out of his boredom and alienation. His life of flabby ease had not prepared him for a fantastically dangerous mission to outlying, primitive stars - but now, at last, he had a reason for living. And even when he found himself a prisoner of ruthless slavers, even when he learned the shocking truth about what the androids really were and where they came from . . . even when he saw all the laws of the orderly, civilised universe he knew turned upside-down and inside-out . . . he fought on.

For that universe had to be shattered and reborn - even if Derry Horn and the Earth he had irrevocably left behind died in the process!