I, Robot: To Obey 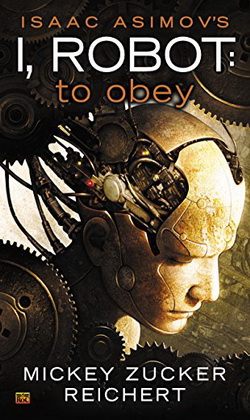 novel no. 02 in the Series: I Robot Trilogy (prequel)

2. A robot must obey any orders given to it by human beings, except where such orders would conflict with the First Law.

2036: Robotic technology has evolved into the realm of self-aware, sentient mechanical entities. But even as humanity contends with the consequences of its most brilliant creation, there are those who have their own designs for the robots: enslavement...or annihilation.

Susan Calvin is about to enter her second year as a psych resident at the Manhattan Hasbro teaching hospital when a violent crime strikes her very close to home.

When she was young, Susan lost her mother in a terrible car wreck that also badly injured her father. She now believes the accident was an attempted murder by government powers who wanted her parents dead. Susan has always known that there was a faction of the U.S. government that wanted to hijack her father's work for military use. Now, it seems that faction is back.

As she struggles to overcome her pain and confusion as well as deal with her studies, Susan finds herself hunted by violent anti-tech vigilantes who would revert mankind to the dark ages - and at the same time watched very closely by extremists who want high-tech genocide. Somehow she must find a way to stop them both.

Previous title
01: I, Robot: To Protect