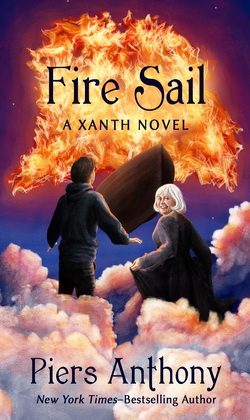 novel no. 42 in the Xanth series

Lydell, a shy, naive man of twenty-one, and world-weary grandmother Grania could not be more different. But when their paths cross on the way to beseech the Good Magician to add some excitement to their extraordinarily dull lives, the one thing they have in common is about to get them more than they bargained for . . .

Lydell and Grania’s exceptional integrity makes them valuable to the Good Magician. He promises to fulfill their hearts’ desires on the condition they pilot a fireboat to its new proprietors, whoever—and wherever—they may be.

Along with an obnoxious bird and a robot dogfish as shipmates, they unfurl their sail of flame and cruise through the skies of Xanth, guided by cryptic clues. Picking up a crew of future children along the way, Lydell and Grania must plan a royal wedding, detonate an F-Bomb, evade illusion dragons, rescue Jack and Jill, find a princess for a werewolf prince, and face their greatest fears—all while remaining true to their compulsively honest selves.