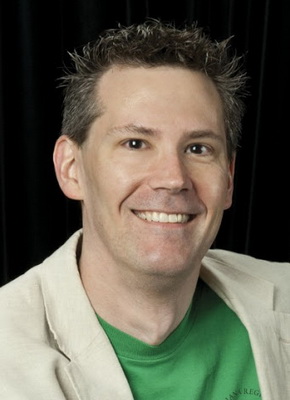 C Stuart Hardwick is a winner of the prestigious Writers of the Future contest and the Jim Baen Memorial Short Story Award. His work regularly appears in Analog Science Fiction & Fact, as well as Galaxy's Edge, Forbes.com and Mental Floss, among others.

I’m a real southerner, I’m from South Dakota, where the Wild West and the Space Age rub elbows with relics of the time of the dinosaurs. My teachers thought I’d become an engineer. I wanted to terraform Mars or be an astronaut or a billionaire who hires astronauts to terraform Mars–or something. I grew up roaming prairies and ghost towns, hiking ancient trestle bridges and poking around old dumps and mine claims and hearing family lore like pages from a Steinbeck novel. I made “radio dramas” on reel-to-reel magnetic tape and animated shorts on 8mm film. Then it was on to junk yard robots and ill-conceived flying machines made of lawn furniture and swing set parts.

Naturally, I became a writer.

That’s worked out pretty well. I won the prestigious Writers of the Future Contest and got flown to LA for a week long writers workshop taught by (among others) Tim Powers (whose book, On Stranger Tides inspired the Pirates of the Caribbean) and Orson Scott Card (Ender’s Game). Then I won the Jim Baen Memorial Award and went back to LA, where I met Rod Roddenberry, Harry Hamlin, and the renowned scientists Dr. Frank Drake and Dr. Freeman Dyson. I was also a finalist for Interzone’s James White Award and I’ve won the Analab Reader’s Poll for best novelette at Analog Science Fiction and Fact, where I’m now a regular.

Along the way, I’ve become a Quora Top Writer for my science writing, and an editor of scifi anthologies, and I’ve just been booked for my first speaking engagement, so that’s cool.